Like Colonel Sanders, but unlike Dr Pepper, there really is a Ben.

I started fixing bikes professionally when I left school in 2009, and I’ve ridden a bike just about every day for the last ten-or-so years. I ride mostly for transport, but when I ride for pleasure I like to go cycle touring (with a tent and stove, as Nature intended), or take in a long day ride on my randonneur bike. Though I’ve probably worked on just about every possible kind of bicycle you could think up, my interests as a mechanic lie mainly with touring and commuter bikes, as well as cargo bikes, tandems, small-wheeled and folding bikes and any machine older than I am.

I spent two years as the mechanic and workshop manager at Roll for the Soul, Bristol’s community bike cafe, which sadly had to close in December 2017.

Like any self-respecting cycle mechanic I have a music degree. When I’m not fixing bikes I like to play the piano, row my boat, take photographs and make wonky furniture.

I look a bit mardy in this picture, I’m working on finding a better one. 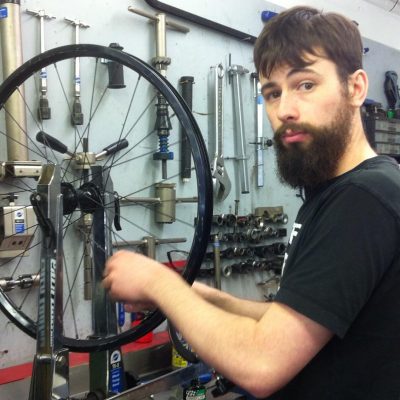